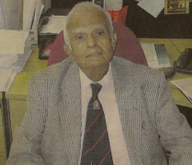 John Hopkinson, who worked with him before retiring from AECOM, paid tribute in a recent interview saying: “Dr Ganapathy Ramachandran, known as Ram, had a determination to take care of his family’s needs and his ambitions to make a mark in the world of statistics, which resulted in him working at the Fire Research Station (FRS) where his existing and potential talent was given more or less free reign.

“He pioneered means of calculating fire insurance premiums based on large insurance claims and fire development rates based on fire brigade statistics. This approach made him one of the few world authorities in the field. As with many pioneers, getting his work recognised was an uphill battle and even today, his ideas are not adopted effectively.

“Throughout his career he lectured to hundreds and visited many nations in the process. His many publications mean that his concepts can still be accommodated once their benefits are appreciated. His later publications continue to highlight areas that could be further developed.”

A service was held at West Herts Crematorium, Hertfordshire on Monday 6 February which celebrated the life and accomplishments of Dr Ganapathy Ramachandran.

The IFE was saddened to hear of the news and wish to express their appreciation for the involvement and contributions Dr Ganapathy Ramachandran has made to the IFE.

The IFE send their condolences to Dr Ganapathy Ramachandran’s family at this sad time.